Categories
Shop By
Shop By
color
Brand
Carabiners for Climbing

Carabiners are found in many models and levels of safety. Find them all here or ask us for advice on which one to choose 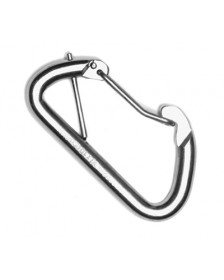 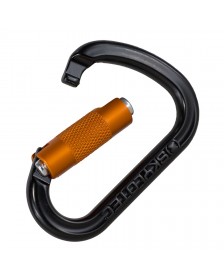 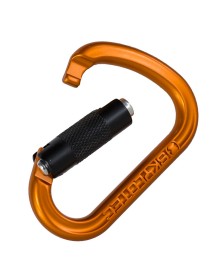 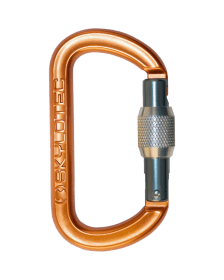 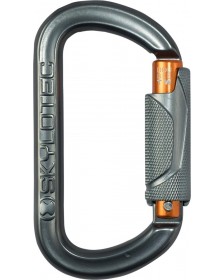 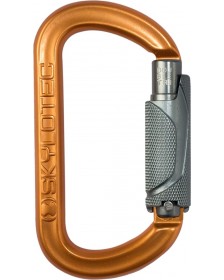 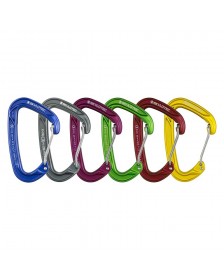 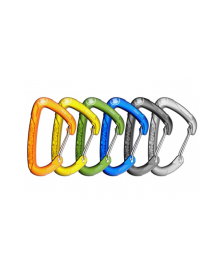 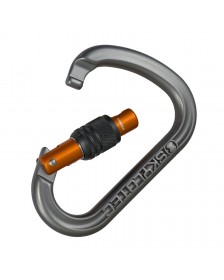 Out of stock In stock
Sort By
10 Item(s)

If you are looking for Express Slings/Quickdraws, look here: Quickdraws.

NOTE: We have placed a quantity discount on some of our best-selling carabiners.

If you need advice, call us or send us your question in the small box at the bottom left.

Oval
The classic carabiner shape and also the most popular due to its multifunctionality. Oval carabiners are good, among other reasons, because their symmetrical shape allows them to be rappelled with and minimizes load displacement, and in addition the shape has room for a lot of equipment.
On the other hand, the strength is hardly as high as other carabiners and the opening is also typically a bit smaller.

D-shape
Although the oval shape is the most popular, the D-shape is preferred by climbers as it moves the weight away from the side where the opening sits. D-shaped carabiners are light, stable, durable and the strongest type, but often also often smaller than other shapes, cost more than the oval shape and the opening is only slightly larger.

Pear shape (HMS)
Like the asymmetrical D-shape, the pear shape has a large opening, so you can easily clip ropes and equipment into the carabiner. They are designed specifically for securing and rappelling but can also be used to set anchors for top rope or multi-pitch climbing. Pear-shaped carabiners are often the most expensive shape and are not quite as strong as D- and asymmetrically D-shaped carabiners.

Pear-shaped carabiners are also known as HMS carabiners, which are also sometimes marked on the carabiner. This means that the carabiner has a wide symmetrical top that works well for use with an HMS knot that you can use to belay with in a pinch.

Bent gate
Bent gate is just like straight gate, very durable and easy to use and heavier than wire gate. The curved gate makes it easier to clip rope into the carabiner with a single hand, and therefore bent gate carabiner are also used for quickdraws as the carabiner you clip the rope into.

Wire gate
Wire gate is a wire made of stainless steel, which makes the carabiner a lot lighter and gives a larger opening as it requires less space. In bent and straight gate carabiners there is a spring that makes the door close automatically, in a wire gate the automatic closing is part of the design. The fewer parts in a wire gate make it even lighter and minimize the risk of the gate freezing in cold wet weather. Although wire gates look less durable than bent and straight gate, they are often just as strong.

Screw-lock
A screw-lock is a manual lock which works by screwing a cover over the top of the gate and the carabiner opening, thereby preventing the gate from opening. As this is a manual lock, it is important to check if it is locked every time you use it.

Twist-lock
A twist-lock is an automatic gate that requires two movements each time it needs to be opened. First, the cover over the gate must be rotated, often 90°, and then the gate must be opened. When the gate is released again, the door closes, and the cover rotates to the locked position automatically. Twist-lock is simple and quick to use and means that you do not have to manually lock the carabiner every time. On the other hand, you still have to remember to check the carabiner every time and it is not quite as safe as a tri-lock variant.

Tri-lock
Tri-lock is a variant of twist-lock that requires a third movement before the other two, which is where the word "tri" is derived from. The third movement that must take place before the other two is that the cover that sits over the gate must be pushed up, after which it can be rotated, and the gate can be opened. Like the Twist-lock, the tri-lock also locks automatically when the door is released. The extra movement makes the tri-lock safer than the other two but also a bit more cumbersome.

Carabiner size
The size of a carabiner greatly influences its capabilities and functionality regardless of the carabiner type. Larger carabiners are often easier to handle and clip ropes and equipment into as the opening is also larger and there is room for more, at the same time they can also be stronger. Larger carabiners will often be used for belaying and rappelling. Smaller carabiners weigh less and take up less space in the harness but are in turn difficult to clip into.

Carabiner material and weight
Carabiners are made from one of two different materials, aluminum and stainless steel. Aluminum is a lot lighter than steel, which in turn is stronger and more durable. This means that when you have to lug around several carabiners, it is advantageous that they are made of aluminum due to the weight advantage, where steel carabiners are perfect where they must be fixed in place and last for a long time. It does not matter that a carabiner is a little bigger and weighs a little more when it is to be used for belaying or rappelling, but when you need to use a lot of carabiners for e.g. quickdraws suddenly a small difference per carabiner can become a lot of extra weight.

Carabiner strength
The carabiner strength is of course dependent on the shape, material and size of the carabiner and is measured lengthwise, crosswise and lengthwise with the door open. All our carabiners meet the UIAA and CE standards and are therefore also approved for climbing. We therefore recommend that strength should be the last criterion you use to determine which carabiner you choose. For example, once you have found two or three carabiners with the desired gate type, material, shape, size and lock, you can then find out which one is the strongest and choose that one.

Which type should you choose?

Now that you understand how shape, gate type, etc. affect a carabiners performance, you can use that information to figure out which carabiner to buy when you know what it's to be used for. Some features are better in some situations than others, e.g. wire gates are good when you need to keep track of equipment in the harness or for lightweight quickdraws for traditional climbing.

If you are an experienced climber you probably already have a favorite when it comes to carabiner types, but if you are new, we have made a small table with some general suggestions:

If you need carabiners for institutions or carabiners that need to be fixed in place for a long time, we encourage you to buy stainless steel carabiners as it is far more important that they are long-lasting than their weight.

If you need carabiners for work at height, it is good practice to use tri-lock carabiners due to the higher safety.

When you know roughly which carabiner you should use, we recommend that you try to handle some carabiner with different size and lock type so you can find out what you are most comfortable with.